MySQL Conference Slides and Thoughts on State of the Dolphin

I did two talks on replication and clustering at the recent MySQL Conference in Santa Clara.  Thanks to all of you who attended as well as the fine O'Reilly folks who organized everything.  Slides are posted on the talk descriptions at the following URLs:

Conferences like the MySQL UC are fun because you get to see all your virtual pals in the flesh and have a beer with them.  This is one of the fundamental open source bonding experiences.  Unfortunately the taps for draft beer stopped working at the bar, and Tungsten is in the middle of a big crunch to get parallel replication working.  I didn't get to hang around a lot this year.  A few things still stood out compared to 2009.

First of all, long-term effects of the Oracle acquisition are clear.   Edward Screven's keynote on "The State of the Dolphin" was sensible and boring.  It seemed a telling metaphor for life in the community going forward.  Oracle is going to do an adequate job of MySQL engineering and better than adequate for Windows.  This is of course "adequate" in the same way that the word applies to products like Microsoft Word.

An adequate MySQL is probably the worst possible outcome for the groups trying to build businesses on alternative builds.  It looks like an effective way for Oracle to neutralize competitive threats from below for a few years to come.   On the other hand, it's good for most users, who won't be greatly inclined to switch unless Oracle tries to soak them for big licensing fees.  At least one conference attendee, a licensee of other Oracle products, mentioned that had already happened.  He's a MariaDB fan now.

Second, solid state devices (SSDs) are for real.   Andreas Bechtolsheim gave a great talk on the coming SSD revolution at the 2009 MySQL Conference.  It sounded good.  At the 2010 conference we started to see some real test results.  The hype on SSDs is completely justified.

There was an excellent panel talk sponsored by Fusion-IO that presented some very compelling results including 10x throughput improvements that allowed one of the companies doing the testing to pull out and repurpose 75% of their hosts.  PCI-based Fusion-IO cards have a 300- to 400X price differential compared to basic rotating disk, but the cost is likely to drop pretty quickly as the technology matures and more competitors enter the field.  Much cheaper SATA alternatives like the Intel X-25 are already starting to flood the low-end market.  Anybody building database systems has to have a plan that accounts for SSDs now.

Third, innovation is continuing apace but the problems (and solutions) are moving away from MySQL.   Mark Callaghan really put his finger on it at his Ignite MySQL talk when he said, "In 3 years MySQL won't be the default DBMS for high-scale applications."  New system investment is going into applications that handle big data, have to utilize new hardware efficiently to operate economically, and require multi-tenancy.  These are good targets for Drizzle, PBXT, Tungsten, and other new projects working to make names for themselves.   We all have to raise our game or MySQL will start to become irrelevant.   It's going to be an interesting year.  :)
Posted by Robert Hodges at 5:07 PM 0 comments 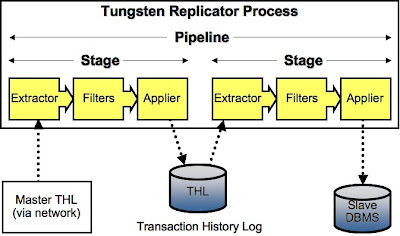 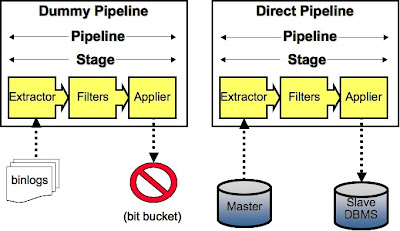 Pipelines belong to a set of major feature improvements to Tungsten to support SaaS and large enterprise deployments.  Some of the other features include fast event logging directly to disk (no more posting events in InnoDB), low-latency WAN transfer, multi-master replication support, and parallel replication.  Stay tuned!
Posted by Robert Hodges at 10:14 PM 9 comments