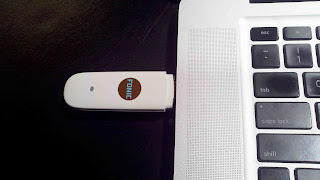 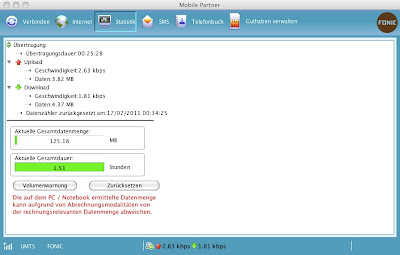 If you know of similar plans for other countries, please share your experiences.  I would love to find something like FONIC for Italy, Spain, and the US.
Posted by Robert Hodges at 9:35 AM

there are similar packages available for switzerland. the packages provided by Swisscom ("NATEL® data easy", www.swisscom.ch) and Sunrise ("T@KE AWAY PREPAID Dayflat", www.sunrise.ch) provide flatrate internet with no monthly fee: you pay per day, and only on days when you are actually using it.

both also offer (sim-locked) wwan modems, but if you travel around alot in different countries, it probably would make more sense to get yourself a simlock-free usb modem like the ones from huwai.

you can get it from various shops. unfortunately, swiss law requires you to register your sim with your passport/id, but it is afaik not limited to swiss recidencies. to top up, you buy prepaid cards in most grocery stores, on train stations, ticket automats and various other places.

on my sweden holidays, i got me a prepaid sim from telia for around €20 including sim & top up. it came with a 500mb limit per month, if you go over your speed will limited yet you will still be able to use it.

Fonic costs you 2,50€ per day. LIDL mobile, sold only in the LIDL food shops costs you 1,99€/day. They work with Fonic and actually the contract partner is Fonic. At Lidl you can buy vouchers for 15€.

Thanks, I didn't get a chance to check out Lidl but noticed they are #1 on the partner page. Do you know if they sell the modem itself and if so if it is discounted from the 49€ at Saturn?

Yes, they sell the modem too. Here is a link to product :
http://www.lidl-mobile.de/html3/preisliste_internet_stick.html
Currently 39,99€ with included 1,99€, just enough for a day of surfing. One can switch to monthly flat for 14,99€.

For Germany you can get a SIM-Card for free from www.germansimcard.com by using the voucher "Germany" at check out (with 20 € credit on it). They deliver worldwide.
Regarding abroadband: 59 cent/MB is a bit too expensive, when Fonic gives you 500 MB for 2.50 €. The price per MB is then 0.005 €/MB...100 times cheaper?

I got the Fonic SIM-Card delivered to the States and payed like 30 $, with 20 € of credit included. The card worked perfectly in Germany in all cities I visited and since I used it only 6 days, I did not need to recharge the credit. Thumbs up!

just bought the fonic surfstick today and tried activated in just a few minutes ago and after a really bad experience with o2 and congstar this one works just as it's supposed to. I went on fonic and activated the sim without problem, it was also the fastest registration and i could chose if my data is used for marketing, doesn't really matter for me since i am us citizen and just using the stick for a few days, until i am back home in the USA.

After the online activation i plugged in the stick, hit next a few times on the installer and that's it. A text message arrived a few seconds later, saying the "Tagesflas" was activated and then i hit connect or "verbinden" and it worked and now i am online. It comes with one day of free use. Just it's already 8:41 pm of this writing and daily plans always count until midnight, so i will have to top up to use it after 12 pm.

After i bought top up cards or vouchers or however they are called with the o2 surfstick as well as the congstar prepaid sim, i bought only the stick this time to try if it works before i pay another 30 bucks.

The speed is fairly good with 2 mb/s on speedtest, the t mobile sim i use in the iphone now delivers 3 mb/s, though 2 is still higher than what i expected.

The surfstick also offers what they call "Kostenschutz", which means after 10 days of "Tagesflat"s the rest of the month's is free, which makes 25 euros for a month.

I am looking for a reliable connection for International calling which offers full Call History from all registered numbers online access. Can anyone suggest me something?
buy calling cards